Hey, it's good to be back with a new dev log :D It's certainly been an interesting month and i have some things to talk about . Firstly though, monthly stats of time worked show a little over 50 hours, something like 10 hours a week. That's a good number and something i'd like to remain consistent with. Enought chatter, let's get to the good stuff: What's actually changed?

First of all, there are some big AI changes coming. while i get that nobody has yet tested the AI, i've completely reworked it from the ground up so that it's just overall better. More optimized, easier to work with from my end, and has a higher ceiling of features. Part of this is something called 'Detection by Affiliation,' fancy name for something super standard and general: being able to tell enemies from frendlies. While the system itself is not incredibly complicated in it's implementation or use, unreal has very little documentation about this. Shoutout to Yari D'areglia of thinkandbuild.it, who's fantastic writeup made this a breeze to set up. 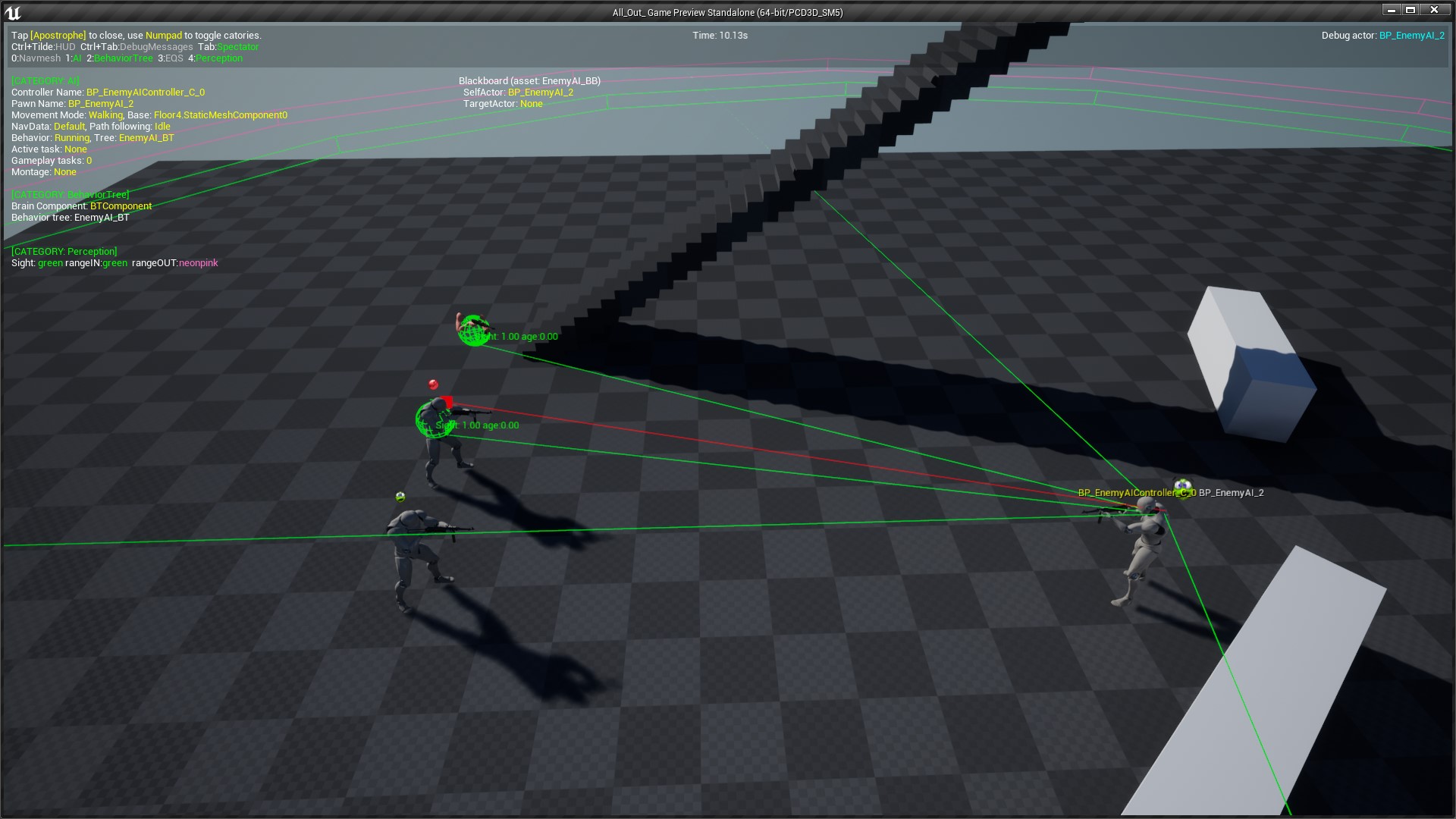 As you can see here, the enemy AI detects only the friendly AI and the player, but not the second Enemy AI.

That's not the only development in AI, i've been working quite heavily on implementing the groundwork for AI behaviour, creating conditions, tasks, and the like to shape how the AI will behave in certain situations. For now, there isn't a huge amount, but a lot of work has gone into algorithms that try and figure out where the target, in this case the player, is in relation to the AI. This allows me to change AI behaviour based on location and inputs, such as sight. For example, the AI will check if it has a clear shot on the player before pulling the trigger. It's quite lengthy to implement properly, and not something you can really see from an outside point of view. Rest assured, more visible AI developments will be happening in the next few days as all the pieces come together.

As you can see in the gif, the AI will continue to look at the point that the player was last seen at, giving the player (that's you!) a chance to disengage and choose a new angle of attack.

Game feel is something very vague, but at the same time critical to a game's experience, and something that i've been working on quite extensively for the last few weeks. Primarily, how the guns feel.

Here you can see a little bit of how the guns look, and you'll be able to try out how they feel for yourself when the patch drops a few weeks from now :)

That's about all there is for this dev log. While i've done a lot more work, such as concepts, laying out locations and finalizing the story of the game, i'm not ready to show that stuff quite yet. I won't have a huge amount of time this month or the next to work on the project (you know, christmas), but i'll do my best to post a dev log on the 4th of january, the first saturday of the new decade. With that said, i'll also try and push an update featuring all the stuff i've mentioned in this dev log and more before christmas.

Happy holdays, and see you soon!

Fall Blau is a narrative driven, authentic World War Two experience inspired by the shooters of the early 2000's